You can be nervous and still give a great speech 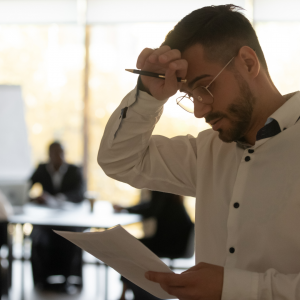 You really can be very nervous and still give a great speech.

If you feel nervous at the thought of presenting or public speaking, you’re not alone

The history books are full of people who by their own admission tell of how nervous they were before an important speech. Many are very open in talking about how they thought they would never get through it.

Somehow they managed to not only do so but also deliver their message with power and impact.

Mahatma Ghandi, one of the world’s most admired and respected leaders wasn’t just nervous, he was terrified of public speaking.

Thomas Jefferson, the United States of America’s third president wasn’t just nervous. He was afflicted with social anxiety which made him very fearful of public speaking.

One of the worlds greatest actors, Sir Laurence Olivier said, “The day I lose my stage-fright is the day I will stop acting”.

The list of famous people is still as long today

Many others have admitted feeling nervous about public speaking:

I told you that you were in good company

The world is full of people who perceive themselves to lack the confidence to inspire an audience, yet have gone on to do precisely that.

We all know how the mind can he help us to conceive and achieve our greatest dreams, or confine us to limitation and misery.

The key to overcoming such anxiety is intent

Having a sincere, heartfelt intention to share something that you believe will be of value to your audience is the best place to start

She begins her speech with the opening line:

“The first thing I would like to say is ‘thank you.’ Not only has Harvard given me an extraordinary honour, but the weeks of fear and nausea I have endured at the thought of giving this commencement address have made me lose weight”.

After rapturous applause and laughter she settles into her stride.

She immediately connects with her audience and is just moments away from winning them over completely.

How does she do it whilst openly claiming such angst?

She endears herself to her audience through 3 extremely powerful communication tools.

In its simplest form this is the process of opening yourself up a little to your audience. It requires acceptance of feeling of vulnerability that accompanies doing so.

In the case of J.K. Rowling, she humbly lets her audience into her personal world as she shares some of the challenges she faced on her journey.

The greatest way to connect with your audience is through the power of story.

Watch how J.K. Rowling achieves this connection with her audience as she shares hers with them.

It’s through the power, clarity and belief in our own message that the fear, doubt and confusion dissipates.

This leaves us free to deliver our point authentically and sincerely.

“I have decided to talk to you about the benefits of failure. And as you stand on the threshold of what is sometimes called ‘real life’, I want to extol the crucial importance of imagination.”

When you speak about something you passionately care about you will feel less nervous.

You have to have a desire to share  your message with others.

If you don’t have something to say which you feel will benefit others, you should feel nervous.

When you care and set a clear intention to make a difference to your audience the idea of feeling nervous transforms into one of excitement.

If you feel nervous when presenting and need some help: