May 13, 2018 By Maurice Decastro In Presentation Skills, Public Speaking, Storytelling 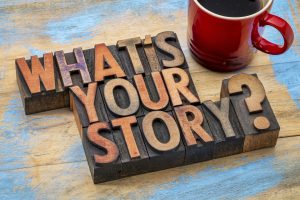 Stories are the key to a high impact business presenting.

They are the jewel in the crown of public speaking.

Stories are the most powerful route to connecting emotionally with an audience. Whether you are looking to lead change, inspire action or unify a team, you have to tell them a story worth getting behind.

The evidence that storytelling is how we learn, connect and relate to each other is steeped in science. Neuroscientists have been telling us for some time that a good story, well told, stimulates the release of a neurotransmitter called oxytocin. Medical News Today describes oxytocin as ‘the love hormone’ . This sounds a little overzealous for an article on public speaking, I know, but it’s worth understanding what they mean. As a hormone and neurotransmitter associated with empathy, trust and relationship-building, it’s a means of connecting with an audience to influence and persuade.

In simple terms, a short, relevant and compelling story which is well-told, can release enough of the hormone to help your audience to feel as though they are experiencing what you have experienced.

If they feel what you feel, they are far more likely to accept and act on your message.

Can you imagine how many of us would continue to buy newspapers, watch or listen to the news if all we ever heard was good news. As blissful as that may sound the truth is most of us like to read and hear about struggle.

Difficulty, hardship, loss and struggle seem to be the key pillars that capture our attention, interest and curiosity. However, told on their own without the contrast of transition, growth or achievement, stories are a recipe for tedium.

If you accept the premise that our whole lives are made up of a tapestry of stories it becomes easier to find them. They are everywhere and our task as presenters and public speakers is to find the relevant and fascinating ones that speak to our message.

Here are seven of my favourite types of story

These are the stories you tell that leave your audience wondering:

‘Is there a lesson in that for me; should I…’

‘We seem to be going through something similar, what if…’

‘Perhaps that could work for us if…’

Many years ago, whilst leading a team of several hundred people in an ailing business, I read a book about a business owner who in a similar position introduced the idea of a mascot to his team. After learning of their great success, it sparked the idea in me and action to do something similar in the business I was trying to turn around. The initiative not only worked beautifully but having recounted the story many times over  the years I have seen it spark action and success with others in a similar position.

Stories about truth are in essence about who we are. They relate to our core values; what makes us think and behave in the way we do.

Shortly after launching Mindful Presenter I faced my own truth.

The response from one executive sponsor who enquired about training for his management team shook me.  I asked him the most important question we ask at Mindful Presenter which was, ‘What do you want your audience to feel when presenting’. He said: ‘I don’t care what they feel as long as they do exactly as I tell them’.

At complete odds with everything I believed in his response caused me great anxiety. After a little soul searching I had the courage to stand by my truth and decline working for that company.

These are stories which describe why you do what you do.

I’m often asked why I started Mindful Presenter and why I am so passionate about public speaking and presenting. In response, I often tell the story of my son’s very first day at school where we listened to his headteacher give a 30-minute welcome speech. After 10 minutes my son looked up with a tear in his eye asking, ‘Daddy, this story is giving me a headache, what time will it finish’.

I realised in that moment that the pain my son described wasn’t isolated to the headteacher’s speech. It dawned on me that businesses across the entire world were doing exactly the same things to adults in the workplace every day.

That was the birth of Mindful Presenter.

These are stories about how you challenged the status-quo.

Do you remember the mascot story I shared with you earlier?

One of the reasons that business was in decline was because it had cultivated a potent ‘yes, but’ culture. Every time someone came up with an idea you could guarantee it would be ‘yes butted’.

In a desperate bid to fix the problem I gave each of the team a stress ball. One side had the words ‘yes, but’ printed on it with a big black cross running through it. On the other side of the ball were the words ‘YES AND…’ printed in big bold letters. I invited each of them to carry their ‘yes and…’ ball with them everywhere they went whilst at work. I gave them permission to throw their balls at anyone in the business anytime they heard them utter those fatal words ‘yes, but…’.

The HR Director of the company insisted that I withdraw the action immediately. I politely explained that if she could offer me another way to save the business I would do so gladly.

She couldn’t and so the balls took flight.

These are stories about the future.

After listening to the Headteacher ramble on my son’s first day at school I had a dream. Compounded by many years of listening to dull, uninspiring and arguably unnecessary presentations I began to imagine what the world would look like if we:

– Stopped reading slides to our audience

– Used compelling images instead of text

– Left the corporate spokesperson at our desk and spoke authentically

– Only shared what was meaningful, valuable and relevant

Stories of imagination are about the future, what the future could look like if only we…

These are stories of that moment of realisation; a discovery, epiphany or flash of inspiration.

I often tell a story about a eureka moment I had whilst working in Japan. After travelling for 18 hours, I arrived feeling totally despondent about being so far away from home and my beautiful family.

I decided to have a bath and an early night in the hope that a good night’s sleep would do the trick.

Whilst relaxing in the bath a rubber duck changed everything.

I picked the duck up, played with it and beautiful memories of my baby son thousands of miles away came flooding back to me. A simple, yellow rubber duck brought such joy to me when I needed it most.

In an instant I realised and embraced the idea that the smallest and simplest thing could make such a mammoth and empowering difference.

Stories about personal and professional struggles and how we overcame them in a way that others may be able to learn from are immensely powerful.

Many years ago, an old boss of mine caused me a great deal of unrest and many sleepless nights. We clashed terribly on just about everything imaginable. The relationship became so insufferable from my perspective that I felt the job was untenable. After months of anguish I decided that the only solution for me was to resign. I had resisted the idea for a long time because I loved the job; it was just my boss I couldn’t stand.

After making the decision to resign over the weekend I sat down to read a book called ‘The Alchemist’ by Paulo Coelho. By the time I finished reading the book it occurred to me that perhaps there was another solution to my dilemma.

I asked myself, what would happen if I:

– Were to look at things from my boss’s perspective

– Put myself in his shoes

– Asked him what I can do to help him

– Forgot about myself for a while and put the business first

I spent the next 3 months doing exactly that and our relationship changed; everything changed for the better.

Within 6 months my boss left the company

This was one of the greatest struggles of my career. When I had the presence of mind and courage to change the way I was looking at the situation, everything changed.

If you want to connect with your audience emotionally as well as intellectually tell them a story.  When you want to make an impact and be remembered, take your audience on a journey of struggle, growth and triumph.

If you need a little help telling stories in your presentations: