Questions: How NOT to answer them like a politician 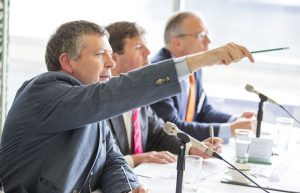 Questions are the Achilles heel of the inexperienced, unprepared and nervous presenter. At least, that’s what most people would assume. Whilst it’s true, it’s not isolated to those groups.

In fact, even seasoned public speakers and presenters find the moment they are called on to answer questions the most challenging. Even politicians.

After all, we know we are being judged and we feel exposed and vulnerable. Having relinquished control the moment we conclude our presentation and invite questions, anything can happen.

What if they ask me a question:

– That’s completely irrelevant to the topic I’ve presented on.

– Which is hostile or emotionally charged.

The final point is particularly prevalent among politicians.  Why do they never seem to give a straight answer to a direct question?

The presenters who face the toughest questions after they speak are politicians.

Here are 9 challenges that they face that we can all learn from.

All too often politicians, just like anyone else in a position of leadership, have to defend policies they don’t personally agree with. Sometimes they even have to go as far as promoting them. When you are paid to be a part of the establishment, unfortunately, it often doesn’t matter what you feel or believe. You still have to stick to the governments agenda.

Whatever your position is, if you have to ‘toe the party line’, tell your audience that is what you are doing.

Have the courage to tell them that your personal views on the topic simply cannot be shared beyond that.

Your audience won’t like or accept the answer if it’s the truth. At least you won’t be wasting their time by rambling on giving them an answer that has nothing to do with the question they’ve asked.

If you agree with the ‘party line’ then don’t be afraid to speak up and say why.

It’s not just politicians who know that when it comes to the sensitive issues and difficult questions every word they say is under close scrutiny.

Politicians fear the often merciless and unforgiving media where the slightest wrong word given out of context can spark enormous controversy and hostility. Thankfully, most business presentations aren’t analysed with the same intent but the fear of analysis remains nevertheless.

If a politician adopts even the slightest difference in stance or perspective as they did a few months ago you can be certain journalist will pick up on it and hold you them to account. Journalists may be skilled at doing so but we know that our colleagues, clients and boss can do exactly the same. Equally, we often speak in fear that whatever we say today has to be repeated almost word for word at any point in the future. Otherwise we will be held to ransom then too.

Choose your words carefully but don’t be afraid of scrutiny. It’s a significant source of angst for speakers and presenter. Speak from a place of truth.

If that truth changes at any point in the future have the courage to state it and why it has changed.

Concerned that the truthful answer to a direct question could spark unrest, resentment or anger, many of us would go out of our way to evade confrontation.

Politicians have feelings like everyone else and most wouldn’t knowingly want to enter into an emotionally charged discussion. Presenting in business is exactly the same. No one likes conflict and most of us would do anything to avoid it.

Unfortunately, if you are in a position of leadership you are likely to experience conflict at some point.

Have the courage to face it with respect and honesty. Acknowlede and empathise with the impact your answer will have on others that you cannot change. We all have to make decisions from time to time that others may not like or vehemently disagree with. It’s a fact of life that we can’t please everyone all of the time. We have to deal with the consequences.

Avoiding the issue is only doing both your audience and yourself a disservice.

Politics can of course be extremely complex and things can change quickly. If there is the slightest possibility that the position could change at some point in the future, it may be unwise to commit to a definitive answer until things are much clearer. Business is exactly the same, in fact, most organisations are changing at an unprecedented rate.

Things can always change. That’s a part of the complexity of being human and living in a rapidly changing and uncertain world.

Don’t be afraid of telling it as it is today in the knowledge that things can and probably will change in the future. We each have the responsibility to own the changes we create or are a part of, and to be honest about them.

Politics revolves around the job of holding a position of power in the government. If you wish to keep that position and stand any chance of achieving a higher one, it makes sense to do what those who have progressed before you have done to good effect.

If that means not answering a question directly because that’s the way it’s always been and the perception is the public wouldn’t expect anything else, why would you break tradition?

It seems to me that many politicians operate under the naivety that people are so accustomed to them not answering questions that no one will notice if they continue. It’s largely the same in many businesses today; if the leaders above you or have spoken before you have always done the same it’s likely that you will too.

One of the key responsibilities of effective leadership is to challenge the status quo where appropriate rather than working dogmatically to resist it. Never be afraid to break with tradition to lead by example and be a driving force for positive change. If that means challenging the establishment by answering a question no one else has the fortitude to, then lead the way, don’t follow.

Politicians are human, they cannot know the answer to every question.

Whether you are a politician or project manager, it pays to prepare exhaustively in anticipation of every conceivable question you may be asked. As the old saying goes, ‘failing to plan is planning to fail’.

Preparing in advance for questions is a pre-requisite for the mindful presenter. I can’t tell you the number of professionals I have personally coached who have told me that they normally, ‘wing the Q&A session’.

When it comes to presenting and public speaking ‘winging’ anything is unprofessional and dangerous.

That said, even with extensive preparation and foresight we can’t know the answer to everything. When that moment arrives here’s what you should do.

– Step into the question

In other words, be mindful of the fact that the typical response is to be on the ‘back foot’, in other words physically stepping back or leaning backwards into your chair if you are sitting behind a table. Rather than stepping or leaning back, take a moment to breathe and move forward.

The confidence you will convey by a forward movement will speak volumes to your audience and command credibility and respect for you, acknowledging that you don’t know the answer.

Instead of being like a rabbit caught in the headlights, don’t be paralysed by the question by focusing on the questioner.

Make eye contact with the rest of the audience as you confidently step forward to say, ‘I don’t know, let me get back to you.’

Just because the question appears clear in the mind of the questioner when they ask it, that doesn’t mean they have articulated it in a way that makes sense to you.

Many of us suffer from ‘The curse of knowledge’ . Simply put, this is when you know things that the other person does not know and you have forgotten what it’s like to not have this knowledge. That means that just because the questioner understands their question it doesn’t necessarily mean that you should too.

– Have the courage to admit you don’t understand the question and ask them to explain it.

– Repeat the question back in the way you think you understood it and ask if you’ve received it correctly.

– Say, ‘Would you mind repeating your question. I think I missed a detail there.”

Politicians are faced with this issue frequently.

Their response is often to ignore the question and answer a completely different one of their choosing.

It’s a challenge for most of us in business presentations too. You can be certain that once in a while you will be asked a question that has little or no relevance at all to the topic you have just presented on.

When this happens here is a respectful way to respond:

‘Would you mind if I discussed that with you directly once we’ve finished? It’s an interesting question, although my sense is that it may be a little off -topic right now but I will be happy to stay after the presentation and discuss it with you.’

A long history of politicians not answering questions they are asked, has created an environment for them where unfortunately questions can all too often be asked in a hostile or emotionally charged way.

Thankfully, in business the vast majority of audiences are polite, friendly and respectful. They came to learn from you and want you to do well.

Presentations in business can trigger hostile questions every now an then too.

Sometimes these are simply people in the room who:

– Misunderstood what you have said.

– Don’t agree with your perspective and believe you should know.

– They feel passionate about the topic and need to be heard.

– Are vocal and expressive in every situation; it’s not personal.

Whatever category you believe they fall under your first priority is to stay calm, focused and resist your reptilian instinct to be defensive or answer immediately.

Take a deep breath, pause, smile and ask yourself whether you have really understood the question.

Your first challenge is to understand what exactly it is they are asking and why they may be asking it.

Once you believe you are clear on the specific question consider check their motivation behind asking it.

Ask them what the question is really about. For example,  ‘It sounds to me as though your main concern revolves around:

Once you have clarity and confirmation don’t be in a rush to find an answer.

If you don’t have one then summon the courage to say, ‘just give me a moment to gather my thoughts on that’.

Take the emotional charge out of the question by avoiding responding with any form of hostility yourself. Acknowledge and respect their feelings by saying so in a calm and courteous way.

Focus on your experience. It’s all too easy to argue with and challenge data but it’s much harder to bicker over your personal experience; after all, its your experience, not theirs.

Questions and answers are an extremely important part of any presentation.

You can deliver a beautifully crafted, content rich and stunning presentation but rest assured that you will also be judged on the way you answer questions.

Politicians have created an extremely difficult world for themselves in the way they typically respond to questions.

The good news is that we can learn a great deal from them and the mistakes they have made.

If you need a little help preparing for and answering questions when presenting: