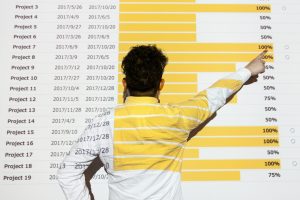 These 21 Powerful PowerPoint tips will add enormous value to your presentation to create the impact you want and your audience needs.

Eight years ago it was estimated that there were more than 500 million users of PowerPoint globally, PowerPoint had an estimated 95% share of the presentation software market and around 30 million presentations were given every day using that software alone.

It’s difficult to extract the data today but I’m told that PowerPoint is still the market leader by far but it’s not hard to imagine that not only has the presentation software market expanded considerably but that all over the world people are using slides more than ever.

Whatever the critics say about using slides in business presentations it doesn’t alter the truism that ‘A picture is worth a thousand words’.

The criticism is aimed at the user for misusing the tool not the software itself. It’s a fact that the human brain processes information more effectively when it is accompanied by images. It also helps a great deal when you use short, memorable statements. That’s why simple but creatively stunning and relevant image-based slides will always be used by presenters to help them bring their message to life.

Given the fact that when used effectively slides can add enormous value to a presentation this article will offer some insight into what you need to do to create the impact you want.

Audiences can only process one piece of information at a time productively. They can either listen to you or read your slides but they can’t do both  effectively at the same time. This seems to be a paradox that most presenters know but still ignore; people still create slides for their audience to read and then talk over them. The key to crafting high impact slides is to think like a good designer.

Whilst most business presenters have little or no design experience there is still plenty you can do.

You can start by stripping your slides of too many words, graphics and animations and focus on keeping them simple. A highly effective way of doing this is by taking the following advice:

1. Use the flash test

Imagine you are driving down the road and a billboard flashes past you. You don’t have time to stop and read it but in a flash you get it.

That’s exactly what your slides should be designed to do.  If you’re driving and you can’t get the message that quickly the advertiser has wasted their money, and if you’re slides don’t do the same you’re wasting your audience’s time.

Remember though, the slide doesn’t give everything away otherwise there is no need for you!

Always start with a blank slide in the same way an artist would begin to paint on a fresh canvas.
As you begin to add to the canvas consider its purpose, i.e. does adding your logo on every slide really add value? Don’t they know who you are and where you’re from already?

Does that grey and orange wave on the left add any meaning?

If you use templates you’re like a novice painting by numbers, it may be pleasant but it won’t connect you with your audience.

Keep the text short and easy to read in a flash and make sure that it’s large enough so that the people at the back of the room can actually read it.

Use no more than two fonts, and take it easy on the colours. Use 3 complimentary colours at the most, supported by a neutral shade like grey. If you’re using photos or images they should come from the same source or at the very least look as though they do and illustrations of any kind should follow a similar style too.

If you have several images on a slide and one is larger than the others your audience will assume the larger one is the most important and that’s the one you want them to focus on. Consider sizes, positioning and arrangement carefully as a good designer would.

6. Do the deck check

Go through a recent slide deck you have either used or seen and ask yourself what information can you remove as superfluous or split across multiple slides to retain simplicity.

Put the slides in slide sorter mode and see whether you can read each of the headlines and get a clear picture of the journey just from that. If you can’t it won’t pass the flash test.

We are all naturally and effortlessly drawn to things that stand out, so use contrast to get your audience’s attention. Contrast is achieved through size, shape, colour, and proximity.

8. Give them space – especially white space.

A good amount of space sharpens the audience’s focus by drawing them in to the elements you want them to focus on.

9. Make it stand out

Allow your audience to very quickly realise what it is you want them to know by making that element highly visible. So if, for example, you have an image and a really important number, make the number big and bold and the image slightly blurred.

The term ‘Death by bullet point’ was coined because for years presenters have shown their audience’s slides with long lists of bullet points all appearing at the same time on a slide. It’s old fashioned, lazy and highly disrespectful so ditch the bullet points.

The moment a slide goes up with bullet points you can be certain of two things. Your audience will read them and not listen to you. They will select the bullet points which are of the most interest to them and drift off until you get to that point.

Even having your bullet points appearing one at a time makes for a boring presentation.

If you want to emphasize a single point without an image all you have to use is the word in a big bold font and then talk about it. Using it for the one single word or message you want to convey is very powerful.

When I’m presenting on leading change I often use a slide that says:

‘In times of change, learners inherit the earth, while the learned find themselves beautifully equipped to deal with a world that no longer exists.’ Eric Hoffer

I then let my audience read it for themselves first then I blank the slide, I read it once, pause for a few seconds and then read it again.

Then I make my point.

Don’t overwhelm and confuse your audience with too much data or data they really don’t need to know. Don’t make them work hard to see what you are trying to say and why it’s important, make it obvious. Make what you want them to pay attention to colourful and bold while everything else on the slide is just neutral.

One of the best ways to craft slides is to go analogue and simply sketch them out on large post it notes before you even turn to software. Constraining your idea to notes will help you enormously before turning to PowerPoint or Keynote. If you don’t understand your own drawings then it’s possible that what you choose to show on a slide may be too complex.

15. Stick to one idea per slide

“The golden rule is to have one claim or idea per slide. If you have more to say, put it on the next slide,” Pawel Jurczynski

If you’re creating a slide that is designed to show you are on target, don’t use a bulls- eye at the centre of a target with an arrow in it. If you’re talking about a partnership don’t use a handshake. They are boring, obvious and unimaginative so think of something completely different.

Write down what it is you are trying to convey together with the obvious images that come to mind and then brainstorm all of the other possibilities that could help you to illustrate the same thing.

Always use high quality graphics, pictures and photographs. Never stretch a small, low-resolution image just to make it fit and avoid clip art like the plague.

Never read the text on  slide out to your audience – they will never forgive you.

If you are going to speak about an idea presented on a slide at length once your audience have got the idea, blank the slide by hitting the ‘B’ key. Open up a conversation and remove the distraction and bright light of the slide.

20. Use animations sparingly if at all

Fly in, float in, fade, spin and zoom are really distracting and will make you look amateurish. Avoid animations like the plague unless you’re using them for a clear and simple purpose such as revealing a process.

21. Never rely on your slides

I’ve see far too many presenters fail because they relied so heavily on their slides. Always have a back up plan. If the technology lets you down or there is any issue at all with your slides you should still be able to speak. Internalise your message so that you don’t have to rely on your slides and always carry notes with you.

Visual aids can be your most trusted  friend or meanest foe depending on how you use them. Used mindfully they can enhance your presentations in many ways; use them wisely.