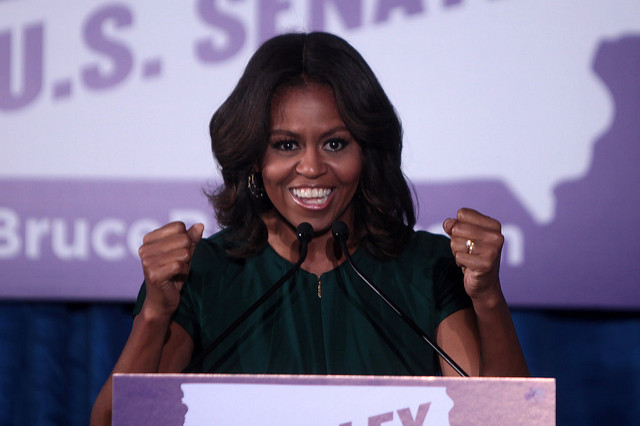 Plenty has been written about the extraordinary oratory skills of Barack Obama.

It seems to me that his wife Michelle Obama could give him a ‘run for his money’ at Toastmasters.

Whilst she is no stranger to capturing the hearts and minds of her audience through her rhetoric, this one was worth paying even closer attention to. For those in the convention hall who weren’t struggling to hold back their tears, I can’t imagine anyone wanting to reach for their phones to check their emails.

Here are just 8 of the many lessons we can each learn from her address:

These represent a few of the keys to mindful presenting.

1. Have a clear and powerful message

Michelle Obama didn’t ramble on about immigration, security, trade deals or the economy. She set out to deliver a very simple, clear and potent message; it was a message about trust.

“And make no mistake about it, this November, when we go to the polls, that is what we’re deciding -– not Democrat or Republican, not left or right.  No, this election, and every election, is about who will have the power to shape our children for the next four or eight years of their lives. And I am here tonight because in this election, there is only one person who I trust with that responsibility, only one person who I believe is truly qualified to be President of the United States, and that is our friend, Hillary Clinton.”

Everything she said was aligned to helping her audience envision the future and consider who they would trust with their children’s future.

Whether your audience like or even agree with your message is an entirely separate matter. The important thing is that you have one and that everything you say and the way you say it, gives it credibility and life.

To reinforce her message about who she would trust to lead America and the impact that leadership would have on future generations, she didn’t just say it.

She made sure she repeated it in such a way that her audience would be left in no doubt.

To support her plea to her audience to consider who they could trust, she made it abundantly clear who she wanted it for and why she wanted it.

Who she wants it for

Kids who wonder how they’ll ever afford college

Kids who look to us to determine who and what they can be.”

“I want someone with the proven strength to persevere…

You may not be speaking on something as important as the future of a nation but whatever your topic, it pays to repeat what you want your audience to focus on.

Whether you are presenting to a nation, your team at work or simply a client you can always be certain that ‘less is more’. I often express the view that most presentations are far too long.

In this case Michelle Obama said everything she needed to say, eloquently and emotionally in less than 15 minutes.

In that time she had rapturous applause, laughter and even tears from her audience and she didn’t need a moment longer to make her point.

It’s no surprise that some of the most famous speeches in history are less than 20 minutes in length.

You really don’t need longer than that to make your point so that people ‘get it’ and you create a lasting emotional impact.

Have you noticed that TED talks are always 18 minutes or less?

I can’t recall hearing one statistic in Michelle Obama’s speech, which for any political speech is quite unusual.

This was a speech full of stories.

These were stories about her daughter, her husband, Hilary Clinton, and her hopes and aspirations for her country.

They were short, relevant and personal

Each offered to help her audience to see what she saw and felt.

If you want to connect with your audience emotionally as well as intellectually there is no more effective way than doing so by telling them stories.

5. Talk about what matters the most, people

At a time when there seems to be such turmoil and uncertainty in the world now is the time to talk about what matters the most, people.

That is exactly what she Michelle Obama did so beautifully.

What could any audience be more interested in than the future of their children and grandchildren?

Many political speeches are remembered for all the wrong reasons.

They are often vitriolic, divisive or demeaning to fellow politicians.

This speech will be remembered for all of the right reasons

She united a convention hall and brought them to their feet through the sheer power of well-chosen and mindful expression.

“The story that has brought me to this stage tonight. The story of generations of people who felt the lash of bondage, the shame of servitude, the sting of segregation, but who kept on striving and hoping and doing what needed to be done so that today, I wake up every morning in a house that was built by slaves. And I watch my daughters, two beautiful, intelligent, black young women, playing with their dogs on the White House lawn.”

This wasn’t a speech of despair.

It was a humble and optimistic speech of hope, recognising how far a nation had already travelled.

At a time when Donald Trump appears to have gone out of his way to insult and offend others, Michelle Obama, was intelligently graceful and extremely mindful.

She didn’t once mention his name.  Despite that, she made it abundantly clear who she was talking about without stooping to his level.

Her comments were as mindful as they were powerful.

“So look. So, don’t let anyone ever tell you that this country isn’t great—that somehow we need to make it great again—because this right now is the greatest country on earth. And as my daughters prepare to set out into the world, I want a leader who is worthy of that truth.”

In fact, she set the scene for her speech much earlier when she said what I believe everyone wants to hear from our political leaders.

‘How we explain that when someone is cruel, or acts like a bully, you don’t stoop to their level -– no, our motto is, when they go low, we go high.’

I wish she had made that point to our political leaders in the UK when they cruelly tore each other apart in the EU referendum campaign.

What would be the point of asking an audience to spend 15 minutes listening to you speak without making it clear at the end what you want them to do with the information you have shared.

What a perfect way to end such an emotional speech:

“So in this election, we cannot sit back and hope that everything works out for the best.  We cannot afford to be tired, or frustrated, or cynical.  No, hear me — between now and November, we need to do what we did eight years ago and four years ago:  We need to knock on every door.  We need to get out every vote.  We need to pour every last ounce of our passion and our strength and our love for this country into electing Hillary Clinton as President of the United States of America.

Let’s get to work.  Thank you all, and God bless.”

These articles are designed to bring you the very best in practical advice, tips and suggestions in Mindful Presenting. If you have others that you would like to share with our readers then we would welcome you in doing so by leaving your thoughts in the comments section.

If you’d to develop your public speaking skills: