How to tell a story to bring your presentation to life 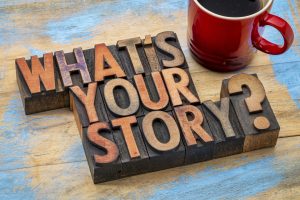 Every great presentation is really a story.

This was a task she had failed to finish thirty years previously.

After 29 hours in the water, strong currents and winds pushed her miles off course causing her to abandon her dream for the second time.

In October 2011, Diana tells TED Talks about the adventure and how she swam with some of the most dangerous jellyfish in the world.

She has a story to tell that most of us will probably never get even close to in our lifetimes.

It’s not just the story, it’s the way she tells it

Having the most interesting content in the world is ‘just another speech’, if you can’t bring it to life when you tell it.

Every great presentation is a story

Every great story has an opening that makes us want to listen to the rest of the story.

Here we have a record setting long distance swimmer telling us how a couple of years previously she had turned 60 and was “grappling with this existential angst of what little I had done with my life”.

How she couldn’t forgive herself for “countless, countless hours I had lost in negative thought.”

Then she asked why:

Self-disclosure at its best

Diana Nyad not only shared the remedy but did so in a captivating and enlivening way.

She told her story by animating and reliving every moment of the experience with her audience in thought, word, emotion and action.

It’s how a great story should be told

Your audience doesn’t just want to hear it, they want to re-live and experience it with you.

Our gestures, sounds, expressions, movement and every cell of our being needs to be congruent with the words.

When she told us about how fast she swam she showed us.

As her story moved to her singing in the dark in the middle of the night, she didn’t just say it, she sang too.

When she told us how she jumped into the water she even jumped.

Actions speak louder than words, especially when we are telling stories

Then of course there is the descriptive detail without which it’s pretty hard to empathize with your speaker:

“And I was on fire — excruciating, excruciating pain. I don’t know if you can still see the red line here and up the arm. Evidently, a piece this big of tentacle has a hundred-thousand little barbs on it and each barb is not just stinging your skin, it’s sending a venom. The most venomous animal that lives in the ocean is the box jellyfish. And every one of those barbs is sending that venom into this central nervous system. So first I feel like boiling hot oil, I’ve been dipped in. And I’m yelling out, “Fire! Fire! Fire! Fire! Help me! Somebody help me!And the next thing is paralysis.”

How do you then close a powerful, impassioned and inspirational story?

Leave your audience with a brilliant quote and mighty message

“To paraphrase the poet Mary Oliver, she says, “So what is it, what is it you’re doing, with this one wild and precious life of yours?”

On the morning of August 31, 2013, Diana began her fifth attempt to swim the 103 miles from Havana, Cuba to Florida.

On September 2, 2013, she reached the beach in Key West, 53 hours after she started swimming.

Here is what she had to say about it at her second TED Talk in December 2013.

If you thought the first story was amazing, I urge you to listen to this one too

Once again, content aside, I’d be very surprised if you’re not gripped by every word she says.

Most of us won’t be presenting about how we managed to achieve what many of the greatest swimmers in the world have been trying to since 1950.

If you haven’t been swimming with some of the world’s most dangerous fish that can be really hard to do.

Often we are called on to present:

A status or progress report

Briefings to help people do their job better

Whatever the topic or purpose, its worth being very mindful of the fact that people love and remember stories.

Your audience’s mind is already full

They are being bombarded with information from a myriad of sources.

Most people have so much to think about already.

What could you possibly have to say that they will remember?

That’s why you have to tell them stories

We have to interrupt their thought patterns.

That involves connecting with the deeper parts of their brain.

The parts where emotion and memory work together; the hippocampus and amygdala.

Whatever you are speaking about don’t just share information

Tell your audience a story about something:

– Interesting or strange that you experience

– That made you think, feel or believe the way you do.

You may not have been stung by 9 jellyfish but you have another story to tell.

– Something that changed a customer’s life for the better

Tell them a story that is captivating, memorable and contains practical lessons

Even when your business presentation is data rich, telling a story can animate the raw data

It can help you to really connect with your audience.

Make sure its a meaningful and relevant story that has a lesson, moral, insight or objective.

I’d like to close with a slight twist on the quote Diana shared from the poet Mary Oliver in her TED Talk:

“So what is it, what is it you’re doing, with this one wild and precious PRESENTATION of yours?”

Tell them a story!

If you need help crafting your story: