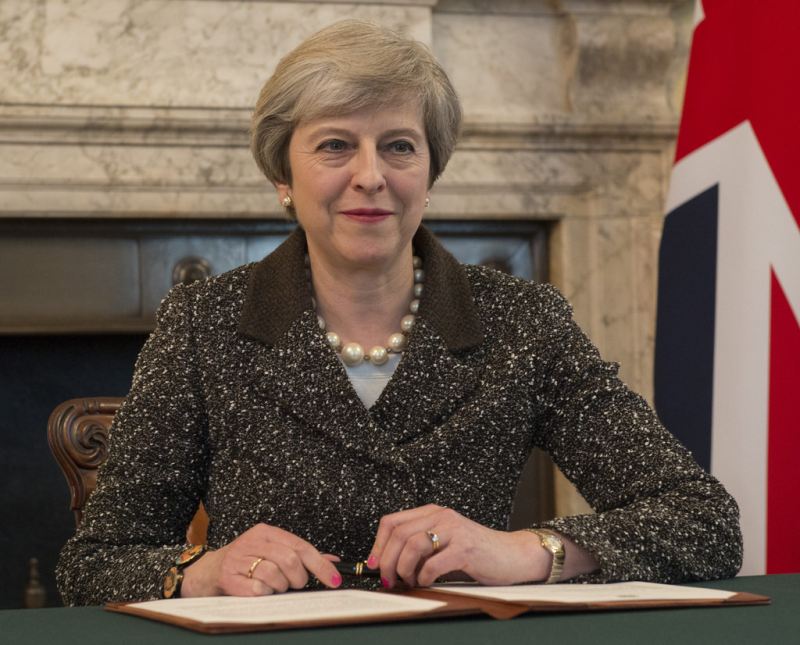 Article 50: How memorable was Theresa May’s speech on such a historic event?

This time last year most of us wouldn’t have heard of Article 50, yet its triggering last week was hugely momentous. Given that no other country has ever left the European Union before, it was a truly historic moment when Theresa May confirmed the Government’s decision to invoke Article 50.

As an extraordinary announcement of such a pivotal and final decision on the future of a country, many would expect the manner in which the action was announced to the world to be equally memorable. Politics aside, I believe it’s worth taking a few moments to reflect on the way in which the British Prime Minister told the world that the United Kingdom will definitely be leaving the European Union.

Last summer I wrote an article called, Theresa May or Andrea Leadsom: Who is the better Public Speaker? In which I said, “Theresa May is clearly a confident and able speaker, although from her campaign speech it feels extremely difficult to be any more complimentary than that. Whilst professional, it sounded to me as though she was simply ‘going through the motions’.”

How did she present the triggering of Article 50?

Let’s take a closer look at the way she told the world that: “We are going to make our own decisions and our own laws. We are going to take control of the things that matter most to us. And we are going to take this opportunity to build a stronger, fairer Britain – a country that our children and grandchildren are proud to call home.”

I’m not a political commentator or someone who has any specialist knowledge on the subject at all but I am clear in my mind on one thing; politics is complex because people are complex. It seems to me to be an arena in which there are so many different and deep personal opinions that it is impossible to please everyone.

With so many conscious and unconscious forces at work in terms of wildly differing attitudes, mind-sets and personal needs, the notion of ‘getting it right’ is impossible. There will always be supporters, dissenters, winners and losers.

Whether you are leading a country, selling software, rallying your team or simply giving your quarterly update, every presentation carries its own challenges. Alongside those challenges lies the fact that we each have our own inherent style of presenting and speaking in public which can help or hinder us, depending on our audience and our objectives.

There are countless different styles and manners of presenting but let’s look at 4 of the most common we see each week at Mindful Presenter and see how Theresa May used them to trigger article 50.

Theresa May – The Commander

The commander is strong willed, goal orientated and dominant in thought. Their strengths include: self -belief and confidence, the ability to focus exclusively together with gravitas and credibility.

Theresa May opened her speech as a commander.

“Mr Speaker, Today the Government acts on the democratic will of the British People. And it acts, too, on the clear and convincing position of this House…

The Article 50 process is now underway. And in accordance with the wishes of the British People, the United Kingdom is leaving the European Union…

We are going to make our own decisions and our own laws.”

The first minute of her speech was clear, decisive and straight to the point. Everyone in the room knew exactly why they were there and that it was going to be a point of no return.

She then immediately continued to convey her preferred style as a commander to the country and of course the world as she told us exactly what the government is determined to do. Words alone as we all know are meaningless unless expressed vocally with congruence as to their meaning and belief. In this instance no one would doubt Theresa May’s words.

Theresa May – The Facilitator

The facilitator is understanding, has an agreeable manner and is naturally steady and calm. Their strengths include being supportive, patient and loyal.

Notice the sudden but subtle shift in her tone as she moves swiftly from the role of commander to facilitator as she adopts a more conciliatory inflection saying:

“Mr Speaker, at moments like these – great turning points in our national story – the choices we make define the character of our nation. We can choose to say the task ahead is too great. We can choose to turn our face to the past and believe it can’t be done. Or we can look forward with optimism and hope – and to believe in the enduring power of the British spirit.”

Theresa May – The Analyst

The analyst is serious, likes to stick to the facts and is a perfectionist; they are hard to argue with and are very reliable.

With the eyes and ears of the world paying detailed attention to every word she utters this couldn’t be a speech of mere platitudes and directives. It had to include some detail too. This is the role of the analyst, which we also saw to good effect in Theresa May’s speech as she set out in clear detail what the triggering of article 50 would mean to the United Kingdom.

Theresa May – The Motivator

The motivator adopts a fast pace when presenting, works quickly and excitingly and speaks with passion. Their strengths include their ability to command an audience and keep their attention, tell great stories and as a result are always remembered.

I don’t believe that one of Theresa May’s core strengths and qualities as a speaker is that of the motivator but she does have her moments. As was wholly appropriate in this speech she worked hard to seize that moment and closed her speech with some powerful motivational words.

“We are one great union of people and nations with a proud history and a bright future. And now that the decision to leave has been made – and the process is underway – it is time to come together. For this great national moment needs a great national effort. An effort to shape a stronger future for Britain.

With a nation completely divided on the decision to leave the European Union this was always going to be a difficult speech. In terms of content she made sure that there was something in it for everyone. She even went as far as to remind us all that: “I know that this is a day of celebration for some and disappointment for others. The referendum last June was divisive at times. Not everyone shared the same point of view, or voted in the same way. The arguments on both sides were passionate.”

Personally, I believe that this was a clever speech which was very mindfully crafted to ensure that it was perfectly positioned and balanced. Adopting the four presentation styles of commander, facilitator, analyst and motivator served Theresa May extremely well.

Whilst I have given credit where it is due it would be remiss of me not to identify specific opportunities which I believe would have strengthened this historic speech even further. My observations are however noted in appreciation of the fact that this was an extremely difficult and complex speech to make politically. Made in a background of division, change and uncertainly, it carried considerable sensitivity and would represent a significant challenge for the most gifted orator.

That said, here is what I what I would have liked to have seen more of or done differently.

Less clutching of her notes

More eye contact and less reliance on the script

A few hand gestures and a little more expressiveness

Less hunching forward over her notes

If you would like to learn a little more about the 4 presentation styles referred to in this article and even find out which is your preferred style take our style quiz here:

If you’d like to achieve greater insight into your preferred communication style as a presenter and consider your development opportunities take our Style Quiz or contact us to find out more about our public speaking courses.