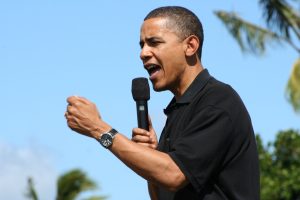 His speeches have changed the way countless people communicate.

He is regarded as one of the worlds most gifted and powerful orators today. His speech to more than a thousand students at the University of Illinois-Urbana was charged with public speaking lessons for all of us. If you have any desire to become a better presenter, here are a few lessons to inspire you.

1. Being serious doesn’t have to be boring

Whilst being a speech calling for action and urgency, Barack Obama opened on a lighter note.

Putting his concerns about American politics aside for a moment, he began saying:

“It’s good to see corn, beans. I was trying to explain to somebody as we were flying in: ‘That’s corn. That’s beans.’ They were very impressed at my agricultural knowledge.

Whatever your message is, find a moment to not take yourself too seriously.

2. It pays to know your audience

This was a speech that was crafted with a very clear intention and objective. It was designed to make people feel concerned and compelled to vote. Before its earnestness, Barack Obama had clearly done his homework. He aimed to lift the mood as high as he could before delivering his message.

“I want to start by addressing the elephant in the room. I know people are still wondering why I didn’t speak at the 2017 Commencement. The Student Body President sent a very thoughtful invitation, students made a spiffy video, and when I declined, I hear there was speculation that I was boycotting campus until Antonio’s Pizza reopened. So, I want to be clear, I did not take sides in that late-night food debate.”

3. Be very clear on your message

Obama spoke for just over an hour; that’s a long time.

He used every minute wisely and very effectively; ensuring that everything he said supported the reason he had chosen to speak. He had one simple but very clear message.

His hour was used mindfully as a platform to ensure his audience understood and felt it.

“I’m here today because this is one of those pivotal moments when every one of us, as citizens of the United States, need to determine just who it is that we are, just what it is that we stand for, and as a fellow citizen, not as an ex-president, but as a fellow citizen, I’m here to deliver a simple message, and that is that you need to vote because our democracy depends on it.”

If you are not clear on your own message, your audience won’t be either.

Start with a clear, concise and compelling message.

A soundbite is something that your audience will easily remember.

It plays a key part in supporting and animating your message. When you are speaking for an hour its very easy to lose your audience. Help your audience to feel the impact of your words.

“In two months, we have the chance to restore some semblance of sanity to our politics.”

“Just a glance at recent headlines should tell you that this moment really is different. The stakes really are higher. The consequences of any of us sitting on the side-lines are more dire.”

“I complained plenty about Fox News, but you never heard me threaten to shut them down, or call them ‘enemies of the people.”

For many speakers, two seconds of silence feels like an uncomfortable eternity in their minds. Many don’t appreciate that those two seconds of quiet are a gift to our audience. It allows your message to get through and settle in their minds. It allows them to keep up with us when we have so much to say. Our momentary pause allows them to breathe too.

A pause exudes confidence and gravitas. It sends a clear message to your audience that you care.

If you ‘d like to be a better presenter build pauses into your presentation.

Many presenters find themselves in a rush to speak. In the process, they often speak too fast. Audiences struggle to keep up with a rushed pace. Barack Obama is the pacemaker of public speaking too.

The best public speakers and presenters have a conversational tone and pace. It’s easy to keep up with them. They breathe inbetween sentences and they speak with clarity.

Each time Obama speaks he does so with a quiet sincerity. A pace which allows you to follow and understand his every word.

Don’t be in a rush to speak. Give your audience the gift of slowing down, breathing and pausing.

Among his many public speaking strengths, is humility. He will give you a momentary glimpse into what is going on his personal as well as professional world. Most audiences warm to the idea of knowing a little more about their speaker. It helps us to relate to them on a human level. This speech was no different. Very early on Obama made a point of telling his audience:

“The truth is, after eight years in the White House, I needed to spend some time one-on-one with Michelle if I wanted to stay married.

And she says hello, by the way. I also wanted to spend some quality time with my daughters, who were suddenly young women on their way out the door. And I should add, by the way, now that I have a daughter in college, I can tell all the students here, your parents suffer.

They cry privately. It is brutal. So please call. Send a text.”

Whether you’re the former president, CEO, department head, or customer service agent don’t stop there. If you’re a brother, sister, father, mother or simply someone’s partner be that too.

Each of us has an opportunity to lead and make an impact each time we speak. Speaking is easy but doing so with impact is often a challenge. These 7 lessons from Barack Obama’s speech will serve us well. They offer a great start on your journey to becoming a better presenter.

If you need a little help becoming a better presenter: