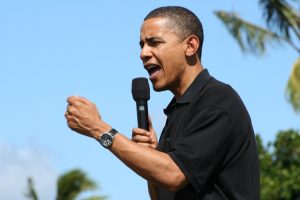 Even a powerful speech offers no promise of victory in politics, or at least that’s what the pundits thought right across the world 6 years ago. Many believe that Mr Obama’s oratory skills has been one the principal means of his ascent and success, and some, (myself included) would argue he is one of the best speakers in the world today.

Leading from the apex of what many would perceive as one of them most difficult jobs in the world it must be exceptionally difficult to hold your own in such a volatile and often hostile political environment. Add to that the pressure to compete with the rhetoric of some of the top presidential orators in America’s recent history including JFK, FDR, Reagan and Clinton and it’s not too hard to see that whatever you say or do it’s an environment most of us wouldn’t survive 5 minutes in let alone 6 years.

Thankfully, I’ve never been called to lead a country and I’m grateful that I stand more chance of winning the lottery first and although it pales in comparison I have led in business. My learning from those leadership years is that it’s not what you say but what you do that really counts. Like many I’ve had the misfortune of working with leaders with impeccable oratory skills yet who simply haven’t walked their talk.

That said what you say and how you say is vitally important too and I believe is a pre-requisite to standing a chance at even being a great leader.

I’m not a politician or a political commentator by any stretch of the imagination but I am immensely passionate about the way leaders communicate and present themselves. With that in mind, as a non- American and with no real personal experience or insight into Obama’s leadership of a nation I am can only offer my opinion on his speaking performance.

Last week’s State of the Union Address was a joy to listen to as an example of what it means to be a brilliant speaker.

President Obama truly knows how to deliver a speech when it matters. From start to finish this was an exemplary speech in every sense.

You will see from the video that Barack Obama really knows how to work an audience. From the very moment he opens his mouth he engages us with an unrivalled rhythm and range of pauses and punctuation that make him melodic yet captivating.

It’s pretty hard to let your eyes wander off to your iPhone when Barrack Obama is speaking. If you’re anything like me you really don’t want to miss a word.

He appears to me to have reached a level of mastery that we very rarely see. This speech like many others before is evidence of his ability to blend passion, energy and sincerity with visual language, story and the body language to draw in his toughest opponent.  He speaks with gravitas yet the humility to have his audience realise and believe that the words he are speaking are his, he believes them and wants us too as well.

In this speech as I have seen in others I find it hard to sometimes believe that Barack Obama is addressing millions of people as one of the world’s most powerful leaders when he speaks as though he is having a conversation with friends, people he really cares about.

It really is a gift that we don’t often see in politics or business today and something we can all learn from.

It’s clear to me that there is much we can learn from with regard to public speaking if we just take the time to examine closely Mr Obama’s delivery. We don’t have to try to emulate him or anyone else for that matter but just to sense what works for him that may also work for us if adapted to our personal style.

Being a brilliant speaker can never be about delivery alone, it also requires rich content and structure. Last week’s State of the Union Address was a beautiful example of how to get both just right too.

If you are genuinely interested in developing your public speaking skills take the time to examine closely the video at the bottom of this article.

Barack Obama opens his speech with 7 short pauses in the first 40 seconds, perfect pacing and a profound reminder of just some of the difficulties America has seen since the turn of the century.

“We are fifteen years into this new century. Fifteen years that dawned with terror touching our shores; that unfolded with a new generation fighting two long and costly wars; that saw a vicious recession spread across our nation and the world. It has been, and still is, a hard time for many.”

After acknowledging the painful times the country has been through what better way to shift the audience’s attention from anxiety to applaud by saying:

“But tonight, we turn the page.”

By way of immediate contrast he quickly reminds his audience through six hugely positive statements of achievement that he had delivered on what he had been elected to do during his 6 years in office: conquer a “vicious” economic crisis and ending ground wars in the Middle East.

After saluting the courage and the sacrifice of American Troops Barack Obama had his supporters leaping from the rafters and the dissenters challenged to disagree with the mood he was setting for his hour long speech.

The following hour is fraught with rich content, powerful stories, humour and the commitment to engage, inspire and rally his audience.

As if that wasn’t enough he closes perfectly by referring back to a letter he quoted much earlier in his speech written by a lady who had shared with him the troubles of her family over the past few years and how they had ‘bounced back’:

“I want them to grow up in a country where a young mom like Rebekah can sit down and write a letter to her President with a story to sum up these past six years:

‘It is amazing what you can bounce back from when you have to…we are a strong, tight-knit family who has made it through some very, very hard times.’

My fellow Americans, we too are a strong, tight-knit family. We, too, have made it through some hard times. Fifteen years into this new century, we have picked ourselves up, dusted ourselves off, and begun again the work of remaking America. We’ve laid a new foundation. A brighter future is ours to write. Let’s begin this new chapter – together – and let’s start the work right now.”

I have no idea whether Barack Obama is a perfect President or even leader but I am certain that his is a truly brilliant speaker.

Don’t just take my word for it, watch this: