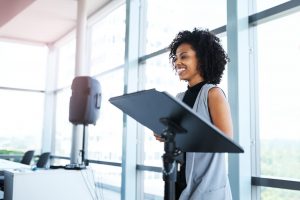 I don’t think I’ve ever witnessed a sales pitch where the pitcher calls the president ‘incompetent’, the competition ‘stupid’ and then insults his business partners.

Until now that is

That’s exactly what Donald Trump did during his rambling speech at the Phoenix Convention Centre last week.

With an audience of thousands and the prospect of reaching countless more, I can’t help feeling that Mr Trump missed a golden opportunity to rally supporters through solutions and optimism. Instead he chose the path of despair.

A mindless game of rhetoric that is certainly nothing new in politics, yet this felt different.

Here are my 8 tips to help him during his next campaign speech:

Movement is energy and creates visual stimulation so use it to your advantage and own the platform in body as well as voice.

It’s really hard to do that when you’re clasping a lectern.

Using one separates you from your audience so do yourself a favour and ditch it.

Speaking from the heart is great and it should be the prerequisite for all speeches but on its own it’s not enough. Every great presentation needs a mindful and robust structure which takes the audience on a journey of knowing where they are, why they are there and where they are going at every moment.

Here’s my favourite which would work perfectly for this speech as it would most.

Attention – Start with something that will create impact.  In this speech Donald Trump was clearly there to speak about illegal immigration, so for example he could have opened with:

‘There were X million unauthorized immigrants in the U.S. in 2014’.

Relevance – Make it clear why it affects your audience and why they should care.

You’ve just told me how many illegal immigrants are in the country so now tell me why I should care. X anything sounds like a big number but as an audience member the first question on my mind would be: ‘So what? What’s the negative impact of that?’

Message – Now I know exactly what the issue is and why it matters so much, tell me the solution and the benefits.

Example – Don’t just give me numbers and facts give me some clear examples of what you mean that I can relate to.

Do – Now I get the picture tell me exactly what you want me to do with the information you’ve just shared.

The last thing any audience wants is to listen to a speaker talk mostly about themselves. No one really cares how much money you have or the problems you are having with your business partners, make your presentation entirely about your audience instead of just about yourself.

What difference can you make to their lives and how does what you have to say help them exactly.

Take time to slow down and pause every now and then. Give your audience time to absorb what you are saying and yourself time to think.

If you have an important point to make, pause for a moment to let it land with impact.

Repeating your key message a few times is not only good practice, it’s a necessity. When you spend an entire hour doing it though, repetition becomes monotonous. Make your point at the beginning, reinforce it in the middle and emphasise it at the end. Just don’t go on and on about it.

A great presentation or public speaking coach will help you to retain the integrity and clarity of your message but help you to craft and deliver it in a way that is inspirational and compelling.

A really good coach will not only help you to attain greater awareness of your strengths as a speaker but also the areas for development.

We each live in a challenging and complex world where despite incredible advancements there is one thing that hasn’t changed.

We all need visionary, positive and inspirational leadership where we are motivated to act from a position of hope rather than hostility.

When a leader speaks from the heart and inspires change the effects are far more powerful and sustainable than when he simply sounds bitter.

Explain the problem but then focus exclusively on the solution and the benefits it will bring to your audience.