The Final Leaders’ Debate – What did we actually learn? 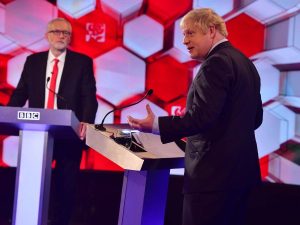 The final leaders’ debate took place last night. Boris Johnson and Jeremy Corbyn went head to head just a few days before what is arguably one of the most important General Elections of our time in the UK.

Politics aside, this was a test of rhetoric. Today, the media is teeming with bold claims of ‘who won’. I don’t think that’s the right point of focus for us at the moment. As a public speaking and presentation skills coach, for now, I’m far more interested in what we actually learned. Whether you’re a political leader, a project manager or pharmacist I believe it’s incumbent on us as speakers to present our ideas and beliefs in a way that is clear and compelling. Whatever our views are on any topic, our audience want clarity, honesty, evidence and conviction.

There were a number of important questions put to the two leaders and the big question is, did they answer them in a way that was at the very least clear and straightforward.

Here’s a perspective on what I believe millions of us watched and learned last night. I’ve tried very hard to leave out the mudslinging and complaining.

“I want to build a society where there is real opportunity for all, where everyone feels supported and secure and where everybody has dignity in old age” – How compelling was that statement, or, is it a prerequisite in terms of expectations; doesn’t everyone want this as a basis of life in the 21st Century.

“There are now 4 million children living in poverty in our country, people can’t get appointments to see their GP, elderly people can’t get the care they need and millions of families are struggling to pay bills.” Is this another lesson in the obvious?

All delivered in a monotone, scripted fashion which did little to capture our attention, interest and curiosity. Here are two questions for you to ponder on before we move on:

How much of that opening statement did you not already know?

How did it make you feel?

“On Thursday next week this country reaches a turning point”- Were you in any doubt at all that Thursday’s election is really important or is that the first thing you needed to be reminded of?

“We can get Brexit done, we can end the paralysis, we can transform our country with massive investments in health, 50,000 more nurses, more funding for every school, 20,00 more police officers. We can spread opportunity fairly”

Are those two big numbers new for you or have you heard them countless times before? Do you know where the 50,000 nurses will come from and are you happy that we are simply replacing the 20,0000 police offers that have been missing for years.

“The only way to unleash the potential of this whole country is if we get a working majority conservative Government.”

Mr Johnsons opening statement was delivered with more gusto as you’d expect although I’d ask you the same two questions:

How much of that opening statement did you not already know?

How did it make you feel?

Both speakers had one minute to capture the hearts and minds of the nation whilst clinging to the lectern. For me it was two minutes of what I have heard and read innumerable times over the last few weeks. Neither opening made me feel eager to hear what was coming next.

If his response, “I don’t think he’s right” could be regarded as a clear answer we are already off to a shaky start.

Mr Corbyn didn’t offer a clear response either, other than saying that “Tony Blair and John Major are welcome to make the comments that they do”.

Nick Robinson the host of the debate then asked Mr Corbyn, “What’s happened to your party Mr Corbyn that the most successful Labour Prime minister in history cannot back you to move in to No.10?

Q. ‘Brexit has taken up so much time already, people are really fed up. Can you guarantee that it will happen next year?’

Rather than giving a simple yes or no answer, it took Mr Corbyn a minute to say, “and that will be the end of the matter” referring to the party negotiating another leave agreement with the EU within 3 months together with a second referendum in 6 months.

Mr Johnson responded without directly answering yes or no to the very specific question.

Q. ‘How would we better off from the Brexit deal or a future Labour deal compared to what we already have as a member of the EU?’

“I’ve mentioned the ways we can cut VAT on sanitary products or regulate differently for bioscience or have ports in areas that need investment.”

Helpful I’m sure but does that fill you with joy, hope and excitement?

“Another major advantage is of course that we take back control of a lot of money that we’d otherwise send to the EU”.

“I might mention also our ability to control our immigration which is not unimportant.”

Do they sound like compelling and exciting reasons to leave the EU to you?

“We will make sure that our jobs and our manufacturing industries are able to continue trading. Over half of our trade is with Europe over this present time.”

Is that a robust enough answer for you on the advantages of Brexit or a new deal, are you clear on what that actually means in real terms?

Q. ‘How would you deal with the shortage of nurses and ensure the NHS can retain them?’

Referring to encouraging nurses to come to the UK from overseas; “We are shortening the time for the application of their visa’s”

“What we’d do is, end university fees”

“Return the nurse bursary, probably on a more generous scale”

“We will recruit as rapidly as we possibly can”

Another decent response; what do you think?

Q. ‘Which has the better track record of raising the living standards of the poor, socialism or capitalism’?

“Socialism carried out in a democratic way in this country, in Scandinavia and other places has raised the living standards of the very poorest”

I think his answer is Labour; did you expect a different answer?

I think his answer is Conservative; did you expect a different answer?

Q. ‘Both of you say that if you’re asked to form a government next week you will spend, spend, spend, making your plans seem like a fantasy. How are we really going to pay for everything you are promising?’

Mr Johnson completely ignored the question by saying what he won’t do rather than how he will pay for everything promised.

Mr Corbyn also completely ignored the question by responding with a series of other questions.

Q. ‘Your most important responsibility if you become Prime minister in a weeks’ time would be to keep us safe. Given the terror attacks we’ve seen on the streets of London are you prepared to put public safety ahead of human rights?’

“It’s not an either or” He then explained why; that sounds perfectly reasonable doesn’t it?

“I see absolutely no reason to compromise people’s human rights such as the perpetrator of the atrocious killings at London Bridge”. Would you disagree with that?

Q. ‘From accusations of Islamophobia and antisemitism in major parties to threats made against female MPs, what would you do to get the hate out of our of politics?’

“When it comes to the protection particularly of female MPs and women in politics its vital that we give them the security that they need and we are doing a huge amount in the House of Commons to deliver that.”

“We need to come together as a country” He blamed the division on the inability to ‘get Brexit done”.

Are you clear now on what he would do; I’m not?

Are you clear now on what he would do; I’m not?

Q. ‘In the era of fake news what punishment do you think is appropriate for elected politicians who lie during political campaigns?’

Mr Johnson dismissed the question by responding with a joke. How does that make you feel?

Mr Corbyn referred to the need for a ‘democratic process’ to hold people to account. Are you any the wiser?

“People say that politics doesn’t change anything but it can.” Where is the recent evidence?

“It was a radical Labour Government that created our NHS and rebuilt Britain.”

That was over 70 years ago, can you really still play that card?

“Today we must be ambitious on the same scale “Now I understand what he meant in his opening statement when he said “Labour is ambitious for our country”. I wish he’d made that clear in his opening.

“The future really is ours to make together. We can tackle the climate emergency, end child poverty and properly fund our NHS. On Thursday you can choose hope and vote for real change.” A great starting point as no one would argue with that but is there anything else?

“This Thursday we can choose another hung parliament under Mr Corbyn and Nicola Sturgeon with two chaotic referendums or else we can get Brexit done, get out of neutral and get a parliament that works for you and on your priorities.” Is that the only choice we really have?

The NHS, the cost of living, 20,000 more police, more cash for our schools. Let’s get it done, let’s move on and vote Conservative on Thursday.”

If you took 20,000 police away years ago and have starved schools of cash does Thursday represent an amnesty so all is simply forgiven and we start again?

In closing, I’d like to leave you with a final thought

I’m sure that some readers will by now be thinking, this is a political not public speaking blog as suggested. The truth is, I don’t know enough about politics to write meaningfully on the topic. What I do know is that the spoken word elicits a far greater effect than the written word and that millions of people will have been influenced by the words of Boris Johnson and Jeremy Corbyn.

What I heard last night for me personally has done more harm than good in terms of my understanding and decision making. The words we choose and the way we choose to express them matter, they matter a great deal.

My only Christmas wish would be that the election was delayed to the New Year so that I could ask Santa who I should truly vote for.

I’ve written about Mr Johnson and Mr Corbyn before:

Boris Johnson Proof That Politics Doesnt Have to be Boring