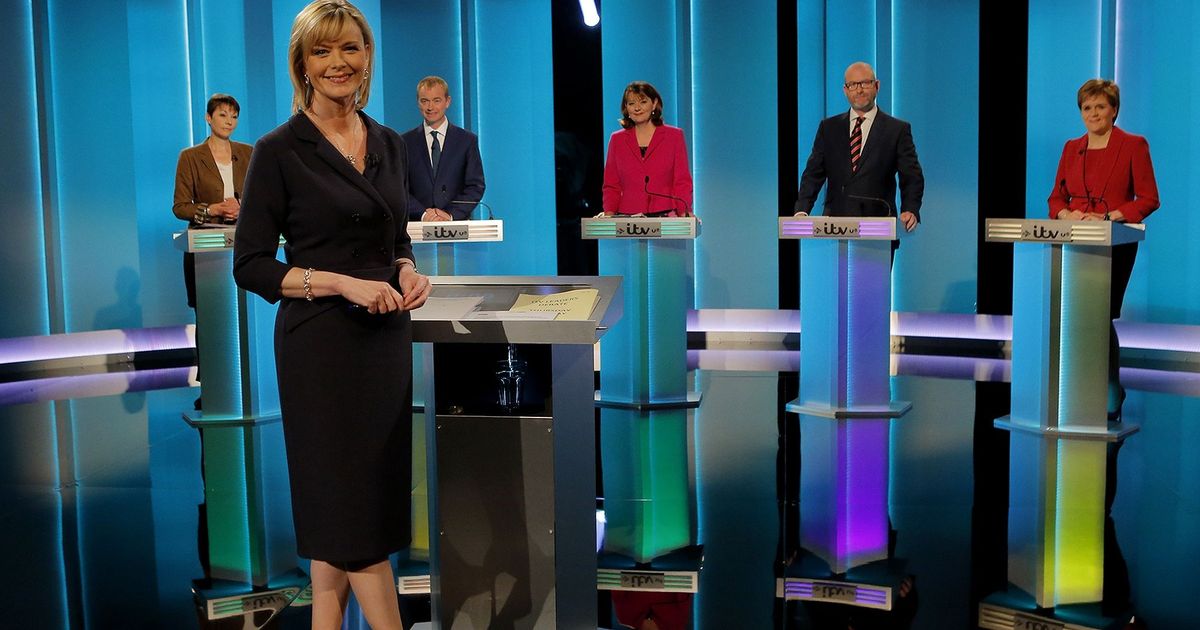 The first leaders’ debate of the 2017 General Election took place last night despite the absence of two key leaders, Jeremy Corbyn and Theresa May.

The question is, was it worth two hours of prime time television after a hard day at work?

From a public speaking perspective some would argue that it was entertaining.

We saw Caroline Lucas make a point of showing the nation her pen each time it was her turn to speak. Paul Nuttall spiced things up by calling Leanne Wood Natalie as he appeared to impersonate Nigel Farage. Nicola Sturgeon taught us how to lean on a lectern and smirk. Leanne Wood shared her personal attachment to her notes when she let go of the lectern in the knowledge that it wouldn’t run away. If that wasn’t riveting enough, we of course had Tim Farron share his autobiography.

Who said politics has to be boring?

I’m joking of course; it was far more polished than that with each leader giving what many would regard as a fair and reasonable public speech. Political views completely aside, here is our take on who is likely to have connected with viewers purely through their oratory skills.

We used a good old fashioned scoring system of marks out of 10. We rated each leader on the effort and level of mindfulness we felt each of them made to connect with their audience.  Taking into account all of the key elements that we believe are required to speak with presence, clarity and impact to ensure that crucial connection our scoreboard looked like this.

When it comes to public speaking what you choose to wear can have a big impact on the first impression you make.

In Tim’s case he arrived in a blue suit with a blue tie which in branding terms I believe is often associated with trust, loyalty and integrity.

The question is; in terms of his oratory did we get what we saw or at least thought we saw?

For me he was by far the most impassioned speaker on the panel last night.

His passion and conviction was highly evident in the way he spoke with such energy, enthusiasm and belief. His facial expressions, hand gestures, eye contact and vocal emphasis were entirely consistent with what he was saying.

He didn’t hold on to the lectern, he didn’t have to rely on his notes; he had a sense of humour and the mindfulness to relate personally to his audience. I joked earlier about him sharing his autobiography but when you want to connect with and inspire people you need to be able to open up a little.

It’s seems to me that is exactly what he tried to do by talking in the form of stories, anecdotes and examples that many people could connect with. I read in the press this morning that some people felt he was a little over zealous in his efforts to make that personal connection and that he had been coached to do so.

Mindful presenters know how to dress to connect with their audience and Nicola Sturgeon had clearly given that a great deal of thought. She took to the podium in a striking red outfit which in branding terms is often associated with power, strength and excitement.

These of course are highly attractive attributes in any leadership role but once again the question is, did her public speaking performance live up to those expectations.

Her approach and demeanour during last night’s debate was undoubtedly one of professionalism. She looked and sounded like the consummate executive presenting in the board room. To achieve that level of excellence she had to tick a large number or public speaking boxes which she did.

She was very focused, calm, confident and composed.

She was articulate, had a great pace and spoke with authority.

She didn’t rely on her notes and spoke with good measure.

What more could you want from a public speech?

As strange as it may sound to some it felt almost too slick and polished to me.

Her oratory as text book solid as it was lacked passion and in my view was one of the least expressive in many ways. In terms of the connectivity that I refer to I believe that her board room ‘matter of fact’ style of presenting looked and felt a little too smug and dare I say laid back to connect with a nation.

She leaned on the lectern when she was listening to her opponents speak almost as though some of us would perhaps lean on a bar. It even seemed to me that she indulged in her lean once or twice whilst speaking herself, which isn’t a good look for a public speaker.

Caroline’s oratory was certainly not boring by any means.

She grabbed our attention immediately with her fervour, energy and flair. She was highly expressive, animated in her narrative and spoke with immense belief that she managed to sustain throughout the debate.

As a public speaker she is clearly a force to be reckoned with and someone to watch out for in the future.

I liked, enjoyed and admired her style of public speaking and her efforts to connect with her audience. The only thing that really distracted me which I joked about earlier was her clutching and waving of her pen.

You probably didn’t notice it but it’s all I could eventually focus on.

Paul also looked very dapper as though he were heading straight for the board room.  His dark suit and striped tie suggested to me that he was going to be assertive, state his case and get straight to the point.

Interestingly, he started off by stroking his own hands for a moment which is often associated with nervousness or a signal that he was ready and fired up to get straight into the debate. I believe it was the latter, he certainly didn’t look at all nervous to me.

He spoke with a level of gravitas that allowed him to make big bold gestures and appear very spirited. There was plenty of emphasis on key words such as ‘bold’ and ‘no’.

As a speaker his tone and demeanour felt far more assertive than engaging or an attempt to connect with his audience. He had a message to deliver and it seemed to me that he was intent on delivering it at the expense of everything else.

The consequence of that was that he made the forgivable mistake of getting his opponents name wrong once but the unforgivable act of doing it again.

Unfortunately, that’s probably all that a great number of people will remember about his public speaking performance last night.

Paul is clearly a very strong and able public speaker although every time he spoke I felt as though I was listening to Nigel Farage.  He had the same tone, pace, pitch, emphasis and even mannerisms that for me he felt like a clone of Nigel Farage. I’ve already expressed a view that Tim Farron sounded a little like Nick Clegg but this was different. In fact, there was a point that I wondered why Mr Farage wasn’t speaking himself.

Appearing in pink Leanne looked friendly warm and approachable to the point that we could relax because we knew we were going to be in safe hands.

When it comes to public speaking the way you open your speech or presentation is extremely important; it comes back to my point regarding first impressions.  In Leanne’s case she started by relying very heavily on her notes unlike her opponents. She also quickly launched into an attack on Theresa May. Whilst many would argue that was completely warranted a really good public speaker knows there are other far better ways of getting an audience’s attention.

After her initial hesitant start she very quickly became quite relaxed and amiable almost as though she were speaking with friends at home. Whilst that is also an attractive and endearing public speaking quality, in this case it made her performance feel quite lacklustre.

She lacked energy and passion, held on to the lectern too much and the only time I felt that she became really animated was when she was challenging Paul.

Our views in this article are shared without political content or bias and are based solely on our personal and professional perspective on each of the leaders’ public speaking skills during last night’s debate.

These views were also shared in a short interview with Paul Ross at Talk Radio which you can listen to here:


Check this out on Chirbit

If this article has inspired you to learn a little more about how effective your presentation skills are you may want to take a look at our presentation training and presentation coaching pages to see how we may be able to help you. You will also find a great deal of really helpful free information in our Learning Centre.